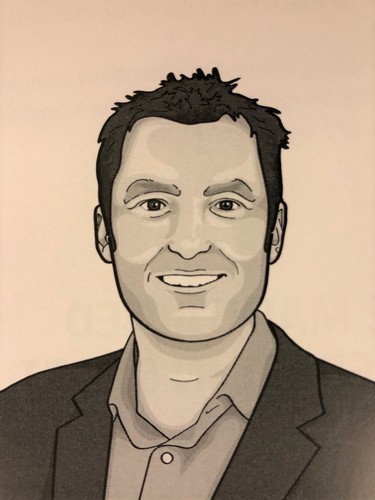 Mike Gawthorne is CEO of Serocor Group which comprises a group of recruitment and talent management companies including Optamor, Bloc, Hawker Chase, Serocor Solutions and ARM, which he joined in 2000. Its Group businesses encompass permanent, temporary, executive search, L & D and MSP/RPO functions for UK and international clients. With six offices in the UK and headquartered in Havant, Hampshire, it employs more than 200 people.

Meeting Gawthorne at Serocor’s prestigious new London offices in Old Broad Street’s Tower 42, I can definitely appreciate the breathtaking vista over the City that the location affords; what an environment to work in! Now, more than 15 years after joining ARM,  Gawthorne is happy to share what the key to the success of the business has been. When asked, without hesitation he says,  “Trust, transparency and fairness to all our people.” His comments chime with the latest findings from the business school world. Professor of Behavioural Economics at Harvard, Matthew Rabin has spent 20 years establishing the principle that “fairness” pays off; people reciprocate in kind to those that are fair to them.

“Our business is built on empowerment; we have a clear five year plan and I am committed to helping the MD’s of our individual businesses grow and also attract talented people who have ambition that can be developed through the vast experience of the Serocor Board,” Gawthorne says. Hampshire born and bred, he has a deep affinity with the county and lives in Wickham with his wife Lucy and their three young sons. “I have sometimes favoured practice over theory; I was always fascinated by mechanical objects, pulling them apart and re- constructing them,” Gawthorne explains of his formative years. He admits to not being a gifted student but his love of sales and business was sparked early on, as he says, “I was quite poor academically but managed to claw my way into college to study engineering and eventually to university, earning my BEng degree. But sales was a love from childhood.” He attributes this to his late father who had taken the risk of setting up his own property management company.

Keen for a job in engineering sales after graduating in 1997, Gawthorne visited a recruitment agency (then Matchmaker Personnel and later to become Matchtech Group) who saw his potential and persuaded him that joining them might be the right career move. “I was interviewed by Adrian Gunn (then a perm manager) and George Materna (who founded Matchmaker and is now non-executive deputy chairman). What I loved was the prospect of the OTE; they promised me rewards that would be commensurate with my effort. I took the “risk”- my friends from university were all on much higher salaries and after speaking to my father, we both recognised the potential of a salesbased opportunity.”

Gawthorne grew the contract business and thrived; albeit, “In certain social settings as a single man, explaining I worked for a business called “matchmaker” drew curious looks occasionally,” he jokingly explains. It was at this point that tragedy struck with the unexpected loss of his father at 53. “My dad was my best friend and role model. He had, I felt, yet to complete his journey and his loss made me step back and look within myself. He was a man with morals, courageous enough to make tough decisions always based on a philosophy of integrity.”

Gawthorne decided making money was less important than creating a legacy in his business life. He decided to take a few months out, during which time he met Paul Huntingdon who had founded ARM in 1996 and remains on the board at Serocor Group. “At the time ARM focused solely on technology. Paul understood my values, believed in me and, took the leap of faith and asked me to be part of the business. Joining in April 2000, aged 24, my challenge was to create an engineering recruitment business from scratch.”

When he joined, ARM had five people and over the next decade Gawthorne progressed well, becoming operations director in 2003 and managing director in 2007. During this period the business grew to 125 people and over £100m in turnover. “After five years of growth, in 2005, we took on an external VC shareholder, Barclays Ventures. They stayed with us until 2007 and the discipline instilled in me by them, in terms of maintaining financial and operational progress, was invaluable.” As the storm clouds began to gather ahead of the global financial recession Barclays sought an exit. Consequently, the management team (including “I was always fascinated by mechanical objects, pulling them apart and re- constructing them” Gawthorne) backed themselves and through a debt-funded MBO took back full control of the business.

Notably, 2008-13 was an exceptional period as during the recession ARM bucked the trend and grew in spite of a stalled economy. Gawthorne elaborates, “Due to the depth of our relationships with clients (some had been with us since I joined ARM in 2000) and the nature of some of the sectors within which we had created a great reputation - such as utilities and defence - we prospered during an otherwise bleak period for the recruitment sector.” Between 2008-2013 the ARM business grew from £75m to £100m turnover and tripled profitability!

Notwithstanding this striking performance there followed a challenging period. In fact, Gawthorne describes the past 24 months as “my most challenging” in the business as it grew very rapidly (hiring wise and in opening new offices in London, Bristol, Aberdeen and Coventry) and undertook a radical change programme.

“By 2013 I had drafted our five-year strategy, we had Miles Hunt (the current chairman) join the board and we set out a very rapid transformation of the business from a single site, single market (UK) business to one which was multi-sited multi-branded and internationally focused; all in a matter of months!”

Gawthorne admits this was too much too fast, deeply affecting the culture of the business. He says, “We underestimated the impact this would have on our people. But when we realised the impact (and given our core values), we admitted our mistake and through maintaining open communications we now have a fully aligned and wonderful team. We did the hard work to protect and nurture our culture.” As Joan Magretta (in her 2011 book What Management is: How It Works and Why It’s Everyone’s Business) says, “Culture building is hard work. It requires communication, communication and then more communication.”

After consolidating the business in the couple of years following 2013, Serocor Group is set for continued growth and expects to hit £120m turnover in 2015/16. Its range of services underpins this confidence. “Offering a balanced portfolio of solutions to our clients is critical to our vision,” says Gawthorne.

“In addition to perm and contract services (through ARM) we can partner with clients to manage all their talent requirements (via Optamor) and also offer dedicated executive search expertise (via Hawker Chase).”

Outside of work, Gawthorne is very much a family man and he and his three sons are all unabashed “petrol heads” with an enthusiasm for cars and bikes! He also realises the importance of giving back to the community and fundraising is high on his agenda. He recently took part in a 300 mile cycling challenge along with some of his Serocor colleagues, raising a substantial amount of money for a local hospice.

Gawthorne is clearly driven by his vision for the future of the business but has learned key lessons from the past, as he says, “The board and I are completely dedicated to helping our people realise their full potential. I have not forgotten the opportunity Paul Huntingdon offered me when I was 24 and I want to ensure anyone with the drive and ambition to succeed is afforded the same chance I had to reach their full potential.”

It is also clear that the values of integrity and trust, derived from his late father and role model, are the elements that give Gawthorne his confidence about the business and people within it.